We’re covering a $1.9 trillion rescue package for the United States, the election in Uganda and the W.H.O. team’s arrival in Wuhan, China. 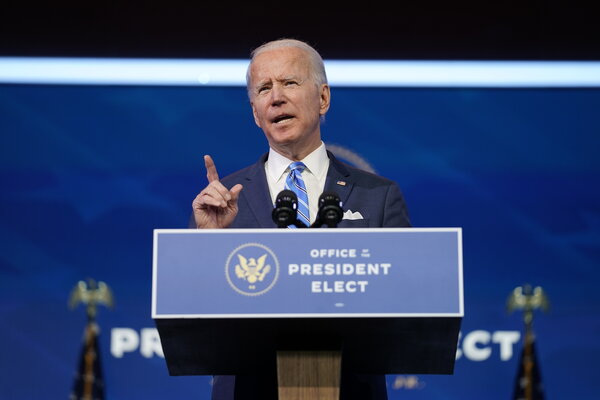 A $1.9 trillion rescue package for the United States

President-elect Joe Biden last night announced plans for $1.9 trillion in government spending to fight the coronavirus pandemic and shore up the economy. The package includes more than $400 billion to combat the pandemic directly and $350 billion to help state and local governments bridge budget shortfalls.

Amid rising joblessness, the U.S. faces economic turmoil. A total of 1.15 million workers filed for state unemployment benefits last week. Another 284,000 claims for emergency federal support were filed by a group that includes freelancers and part-time workers. Both figures are the highest in months.

Capitol riot: Federal investigators are focusing on military and law enforcement personnel who may have been involved in last week’s assault on the Capitol. Several more rioters have been arrested, including a man who carried a Confederate flag into the building.

Inauguration: Thousands of National Guard troops have flooded into Washington ahead of what is certain to be a very different inauguration, with no crowds, a virtual parade and visible military security. The F.B.I. is also urging police chiefs across the country to be on alert for extremist activity.

Impeachment: President Trump, who became the first U.S. president to be impeached twice, faces a trial in the Senate that could disqualify him from running for office again. Here’s what comes next.

The W.H.O. team arrives in Wuhan

More than a year after the coronavirus first emerged in China, a 15-member team of experts from the World Health Organization arrived on Thursday in Wuhan, where they will begin to hunt for the source of the virus.

But China is complicating the process. Two experts were barred from entry at the last minute because they had tested positive for coronavirus antibodies. It’s unclear how much access the team will get for the painstaking process of investigating the virus’s source. And China’s latest flare-ups, and the subsequent lockdowns ordered to subdue them, could present further problems for the investigation.

Analysis: “The major concern here is the origin of the outbreak has been so politicized,” said Yanzhong Huang of the Council on Foreign Relations. “That has really narrowed the space for the W.H.O. to have an independent, objective and scientific investigation.”

Related: China reported a coronavirus death for the first time since May.

Britain said on Thursday that it would from today ban arrivals from Latin American countries and Portugal over fears of a coronavirus variant discovered in Brazil.

France strengthened border controls and extended a 6 p.m. curfew to the entire country to keep the virus in check. The average number of daily coronavirus cases in France is at about 16,000 and nearly 70,000 people have died.

The W.H.O.’s top official in Europe has called for tighter public health controls in the region to slow transmission of the virus, even as the availability of vaccines offered hope for the months ahead.

New research from Public Health England indicates that children are no more susceptible to the new variant of the coronavirus than they were to its previous iterations.

Andy Murray has reportedly tested positive for the coronavirus, putting the tennis player’s participation in next month’s Australian Open in doubt.

Will Ugandans oust their leader of 35 years?

Voters went to the polls in the East African nation on Thursday in a hotly contested election that pitted President Yoweri Museveni, the longtime ruler who has spent 35 years in office, against some 10 rivals, including a leading opposition candidate, Bobi Wine, a rapper-turned-lawmaker.

The vote has been unexpectedly competitive, despite fierce government attempts to stifle the opposition. Government authorities have repeatedly arrested and beaten Mr. Wine during the campaign, detained his campaign team as well as 600 members of his party and forced his security guards to withdraw from protecting his house, according to Mr. Wine’s lawyer.

Mr. Museveni said he would accept the outcome of the election, providing there were no voting irregularities. Results are expected by Saturday.

A newsletter that names names

Many retirement communities have declined to name those who might have been exposed to the virus or been made sick by it, citing privacy concerns. So last May, Diana Wiener, above, age 80, started a newsletter to do just that. The first issue of The Buzz included some news: Contrary to official daily emails, 13 people in her building had died of the coronavirus since March.

The lack of information was dangerous, she said: “Every time we went to the doctor, they would ask you, have you been in contact with anyone? How do I know? They’re not telling us anything.”

Climate change: The year 2020 was the hottest on record, tied with 2016, a new NASA study confirmed. These maps show which parts of the planet have seen the most dramatic changes. This year is expected to be “another top-five year.”

Big Tech: After Facebook and Twitter cut off President Trump from their platforms, human rights groups and activists are urging the companies to apply their policies evenly, particularly in smaller countries where the platforms dominate communications. And a Norwegian group has filed a complaint with regulators, saying Amazon had deliberately made it difficult to end memberships to its Prime service.

Xinjiang ban: The U.S. banned all cotton and tomatoes from the northwestern Chinese region where officials have been accused of creating a forced labor system for the million ethnic Uighur Muslims who live there.

Madrid snowstorm: Madrid’s mayor has called on the central government to declare the capital a disaster zone, warning that the damage caused by last weekend’s snowstorm, named Filomena, would cost at least 1.4 billion euros, or $1.7 billion, to fix.

Snapshot: Above, people line up for food on Monday in the Lipa migrant camp in Bosnia and Herzegovina. The local authorities have refused to reopen an E.U.-funded housing facility for the migrants, bringing criticism that Bosnia is breaching international law.

Lives lived: Siegfried Fischbacher, half of the German-born magician team Siegfried & Roy, who captivated Las Vegas audiences with performances alongside big cats, elephants and other exotic animals, has died at 81.

“Nevermore": One of the resident ravens at the Tower of London is feared to have died. Legend says at least six must be kept there, or the nation will fall. (All is not lost: The tower keeps a bird in reserve.)

What we’re listening to: The sound of hummingbirds. In Suriname, South America’s smallest country, highly trained songbirds compete against one another, in a kind of Battle of the Bands that has become a national obsession.

Cook: These Korean pancakes can be made with virtually any meat or vegetable odds and ends. Good news for the lazy: The less work you put in, the better they come out.

Watch: The Swiss drama “My Little Sister,” about a sibling’s terminal cancer diagnosis. Our critic describes it as “small in scale and big in heart.”

Sing: A sea shanty. Over the past two weeks, a TikTok video of a Scottish postman singing a whaling ballad has been duetted thousands of times by professional musicians, maritime enthusiasts and a Kermit the Frog puppet, among others.

Make the most of this weekend indoors. At Home has our full collection of ideas on what to read, cook, watch, and do while staying safe at home.

“The Great Gatsby,” liberated from the binds of copyright

F. Scott Fitzgerald’s classic novel “The Great Gatsby” is now in the public domain, meaning writers can mine the characters and plot for their own purposes without having to ask permission or pay a fee.

Already, the book has been adapted into a graphic novel, while independently published variations on the novel include “The Gay Gatsby,” by B.A. Baker, and the zombie-themed “The Great Gatsby Undead,” by Kristen Briggs. (From the promotional copy for Briggs’s book: “Gatsby doesn’t seem to eat anything, and has an aversion to silver, garlic and the sun, but good friends are hard to come by.”)

The most ambitious early entry might be “Nick,” a novel by Michael Farris Smith that focuses on the life of Nick Carraway, Fitzgerald’s narrator, before he arrived on Long Island and became caught in Gatsby’s orbit.

All of this follows several films, theater adaptations and other retellings. Gatsby has inspired a Taylor Swift song — “Happiness,” on her latest record, weaves together lines and images from the novel. And even the most minor characters have had spinoffs — Pammie, age 3 in Fitzgerald’s book, has her own story told in “Daisy Buchanan’s Daughter,” by Tom Carson.

A century from its publication, we’re still reading, and rethinking, Gatsby. “Why doesn’t it irritate me more? Perhaps it’s because the book occupies such a peculiar place in the culture,” writes Parul Sehgal, a Times book critic. “As Nick wonders of Gatsby, so readers have wondered of the novel: Is this shallowness I perceive, or miraculous depth?”

That’s it for this briefing. Have a wonderful weekend.

Thank you
Theodore Kim and Jahaan Singh provided the break from the news. You can reach Natasha and the team at [email protected]

P.S.
• We’re listening to “The Daily.” Our latest episode is on the impeachment of President Trump.
• Here’s our Mini Crossword, and a clue: Chef’s hat (five letters). You can find all our puzzles here.
• A hidden haiku in The Times, recently spotted by @nythaikus: “The role of the friend / is to be present, patient / and compassionate.”
• In 2020, NYT Cooking attracted record numbers of home cooks: 113 million people used its recipes, guides and collections, an increase of over 40 percent compared with 2019.

Opinion | Thanksgiving Is a Celebration of Freedom