We’re covering threats of virus resurgence around the world, and the convictions of top pro-democracy figures in Hong Kong. 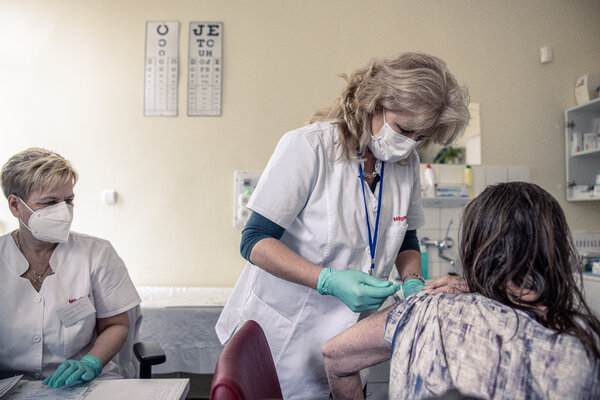 The pandemic is still not over, experts warn

Experts around the world are reminding people that despite hope from Covid-19 vaccinations and a clearer path forward, it is much too soon to let down our guard.

In Hungary, despite the country having one of the highest per capita coronavirus death rates in the world, Prime Minister Viktor Orban has said that his government will not tighten restrictions and is determined to continue moving to reopen society. There were 302 deaths on Wednesday, the highest there since the start of the pandemic.

The U.S., where some states are in crisis mode, is a study in contrasts. In Michigan, a major hotspot, more than 2,200 Covid-19 patients statewide are hospitalized, a figure that has more than doubled since the beginning of March. And yet officials are relaxing mask rules and other measures to get the virus under control.

“Looking at numbers yesterday felt like a gut punch,” said a Michigan epidemiologist. “We’re going to have to go through this surge, and all this hard work again to get the numbers down.”

Italian officials are pushing health workers to get vaccinated after a rash of outbreaks in hospitals where the staff chose not to get inoculated. The government is requiring it now, a move that might be unconstitutional. “It makes no sense that a person whose job is to heal the sick gives them Covid and kills them,” said a man who believes his father contracted and died from Covid-19 because of an unvaccinated nurse.

New data suggested that the Pfizer-BioNTech vaccine works against a worrisome virus variant that has overwhelmed South Africa, although experts said more studies are needed.

Pressure grows for Japan to act over Uyghurs

So far, Japan has mustered little more than expressions of “grave concern” about the fate of the Uyghur Muslims, hundreds of thousands of whom have been detained in camps in China’s Xinjiang region.

It is the only member of the Group of 7 nations that did not participate in coordinated sanctions against China over the abuse. But that appears to be changing, as views toward China harden among the Japanese public. Lawmakers are increasingly calling on the government to take a tougher line on China, and the country’s Uyghur community, about 3,000 people, has been more vocal.

If Japan were to fully join the effort to compel China to end abuses there, it would add a crucial Asian voice to what has otherwise been a Western campaign.

Hesitations: China is a critical market for Japanese exports, and the economy has struggled greatly over the past year. The Japanese retail company Muji, which has more than 200 stores in mainland China, recently declared that it would continue to use cotton from Xinjiang despite accusations of forced labor there.

Raising awareness: Halmat Rozi, a Uyghur living in Japan, invited Japan’s public broadcaster, NHK, to surreptitiously record an intimidating phone call he received from a Chinese security official. The footage was broadcast to millions of viewers.

Seven of Hong Kong’s veteran pro-democracy leaders were found guilty on Thursday of unauthorized assembly, a verdict seen by their supporters as a severe assault on civil liberties in the territory.

The defendants were some of the city’s most prominent and internationally recognized activists: Martin Lee, a barrister known as the “father of democracy” in Hong Kong; Jimmy Lai, a media tycoon and founder of the pro-democracy Apple Daily newspaper; and Margaret Ng, a respected barrister and columnist. They, along with four others, were convicted of participating in and organizing an unauthorized march in 2019.

Severe penalties would send a strong message about how the courts may rule in several other trials this year on similar charges of illegal assembly.

Details: They each face up to five years in prison. Sentences will be handed down on April 16. The case centered on a rally on Aug. 18, 2019, during which protesters marched toward the city’s business district. While there was no violence and minimal disorder, prosecutors argued that the march violated Hong Kong’s public order ordinance.

The crackdown: More than 2,400 people have been charged since Hong Kong authorities set out to quash the pro-democracy movement following protests in 2019, which had posed the greatest challenge to Beijing’s rule in decades.

Myanmar’s security forces have arrested at least 56 reporters, outlawed online news outlets and crippled communications as the military seeks to stamp out dissent after the coup. Young people have stepped in with their phones to help document the brutality.

Rape is being used as a weapon of war in remote parts of Ethiopia’s Tigray region. “What’s happening is unimaginable,” said a member of an association that runs a safe house for women.

The foreign secretary of the Philippines responded forcefully to the recent assault on a Filipino immigrant in New York City, advising compatriots in the U.S. to fight back, saying, “Racists understand only force.” Many in the Philippines have family in the U.S. and view those migrants as part of their community.

China’s foreign minister, Wang Yi, is meeting with counterparts from Singapore, Malaysia, Indonesia and the Philippines this week as Beijing seeks to expand its influence in the region amid a sharp downturn in relations with Washington.

New York State legalized the use of recreational marijuana. And the state’s prisons will end long-term solitary confinement.

There is one silver lining to visiting an art museum during a pandemic: The absence of crowds lets you appreciate the art in new ways. Our critic communed with van Gogh’s “Self-Portrait With a Straw Hat,” and wrote: “I got to do the kind of prolonged, thoughtful looking it takes to really make a painting come alive.”

Hiroko Tabuchi, one of our Climate reporters, wrote in our Climate Forward newsletter about the intersection between climate justice and Anti-Asian discrimination, which we are sharing with you here.

A wave of violence against Asians and Asian-Americans in recent weeks has cast a light on a segment of the American population that has frequently been absent from conversations on racial injustice — and on climate and the environment.

That means vulnerable communities may not be getting the attention they need to address longstanding environmental concerns.

Asian-Americans tend to live in neighborhoods that suffer disproportionately from air pollution, and are likely to be exposed to more carcinogens. (I wrote last year about a Laotian community in Richmond, Calif., that has long dealt with the dangers of living in the shadow of a giant oil refinery and was grappling with the effects of the coronavirus pandemic.)

Native Pacific Islanders, too, have suffered from pesticide exposure and health hazards from waste sites located in their communities, and also are on the forefront of dealing with the effects of climate change. (We recently spoke to Haunani Kane, a Native Hawaiian woman who is leading a climate vulnerability assessment on the effects of sea level rise on the Pacific islands.)

In an incident this week, a 65-year-old Filipino woman in New York City was viciously attacked in New York. It’s difficult to focus on issues like climate change when you feel immediate hatred around you.

Slivers of ginger and scallions elevate this chicken stir-fry.

A British rarity, experimental voices and a Beethoven quartet are some highlights of recent classical music releases.

One ingredient you may be overlooking for at-home cocktails? Honey. Some bartenders say it takes drinks up a notch.

That’s it for today’s briefing. See you next time. — Melina

P.S. Melissa Clark, one of our Food columnists, joined WNYC to talk about Passover cooking.

The latest episode of “The Daily” is about a union drive at Amazon.

You can reach Melina and the team at [email protected].

Opinion | Raising Boys Who Have Empathy and Emotion