Suddenly, talk of the Wuhan lab-leak theory seems to be everywhere.

President Biden yesterday called on U.S. intelligence officials to “redouble their efforts” to determine the origin of Covid-19 and figure out whether the virus that causes it accidentally leaked from a Chinese laboratory. Major publications and social media have recently been filled with discussion of the subject.

Today, we offer an explainer.

What are the basics?

The origin of the virus remains unclear. Many scientists have long believed that the most likely explanation is that it jumped from an animal to a person, possibly at a food market in Wuhan, China, in late 2019. Animal-to human transmission — known as zoonotic spillover — is a common origin story for viruses, including Ebola and some bird flus.

But some scientists have pointed to another possibility: that it escaped from the Wuhan Institute of Virology. As in other laboratories, researchers there sometimes modify viruses, to understand and treat them.

“It is most likely that this is a virus that arose naturally, but we cannot exclude the possibility of some kind of a lab accident,” Dr. Francis Collins, the director of the National Institutes of Health, told senators yesterday.

The subject is getting more attention because some scientists who were once skeptical of the laboratory theory have expressed new openness to it.

Two weeks ago, 18 scientists wrote a letter to the journal Science calling for a new investigation and describing both the animal-to-human theory and the lab-leak theory as “viable.” And three scientists who last year dismissed the lab-leak explanation as a conspiracy theory have told The Wall Street Journal that they now consider it plausible.

Among the reasons: Chinese officials have refused to allow an independent investigation into the lab and have failed to explain some inconsistencies in the animal-to-human hypothesis. Most of the first confirmed cases had no evident link to the food market.

In some ways, not much has not changed. From the beginning, the virus’s origin has been unclear. All along, some scientists, politicians and journalists have argued that the lab-leak theory deserves consideration.

Almost 15 months ago, two Chinese researchers wrote a paper concluding that the virus “probably originated from a laboratory in Wuhan.” Alina Chan, a molecular biologist affiliated with Harvard and M.I.T., made similar arguments. David Ignatius and Josh Rogin, both Washington Post columnists, wrote about the possibility more than a year ago. Joe Biden, then a presidential candidate, didn’t mention the lab-leak theory in early 2020 but he did argue that the U.S. should “not be taking China’s word” for how the outbreak started.

But these voices were in the minority. The World Health Organization initially dismissed the lab-leak theory as implausible. 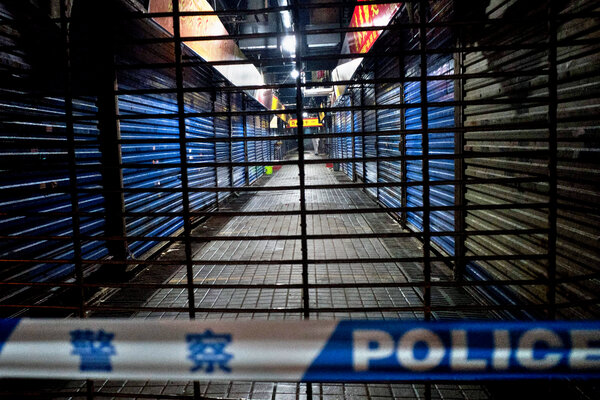 Why all the dismissals?

It appears to be a classic example of groupthink, exacerbated by partisan polarization.

Global health officials seemed unwilling to confront Chinese officials, who insist the virus jumped from an animal to a person.

In the U.S., one of the theory’s earliest advocates was Tom Cotton, the Republican senator from Arkansas who often criticizes China — and who has a history of promoting falsehoods (like election fraud that didn’t happen). In this case, though, Cotton was making an argument with plausible supporting evidence.

The media’s coverage of his argument was flawed, Substack’s Matthew Yglesias has written. Some coverage exaggerated Cotton’s comments to suggest he was claiming that China had deliberately released the virus as a biological weapon. (Cotton called that “very unlikely.”) And some scientists and others also seem to have decided that if Cotton believed something — and Fox News and Donald Trump echoed it — the idea had to be wrong.

Why does it matter?

But there are at least three concrete ways, in addition to the inherent value of truth, in which the origin matters.

First, if the virus really did come from a lab, an immediate airing of the details might have led to even faster vaccine development and more effective treatments. Second, a leak that caused millions of deaths could lead to widespread change in laboratories’ safety precautions. Third, confirmation of a leak would affect the world’s view of China — and would put pressure on China to bear the burden of vaccinating the world as quickly as possible.

So what’s the truth?

We don’t know. Both animal-to-human transmission and the lab leak appear plausible. And the obfuscation by Chinese officials means we may never know the truth.

For more: The Washington Post has published a helpful timeline. On Medium last week, the science writer Donald G. McNeil Jr. explained why he now finds the lab-leak theory plausible. And the sociologist Zeynep Tufekci has argued that the issue highlights some of the problem with the media’s approach to fact-checking.

The Times reports on the latest details about the inquiry Biden has ordered.

New studies suggest that Covid immunity — from either infection or vaccination — lasts at least a year and improves over time.

Daily Covid deaths in the U.S. have fallen roughly 40 percent since the start of April.

The Tony Awards, delayed by the pandemic, will return on Sept. 26, shortly after Broadway’s planned reopening.

Virus resources: Traveling to Europe this summer? Here’s what to know.

The Biden administration is backing a big Trump-era oil and gas project in Alaska.

A gunman killed eight people at a rail yard in San Jose, Calif. The victims were between 29 and 63. Here’s what we know.

A wave of Afghan military surrenders to the Taliban is picking up speed in rural areas as U.S. troops withdraw.

A woman — Laurence des Cars — will lead the Louvre for the first time in its 228-year history.

Mike DeWine, Ohio’s governor, explains why he created a lottery to encourage vaccinations. (The first $1 million prize went to a woman in Silverton.)

Orphan girl: An illustrated telling of tragedy in small-town China.

A Times classic: These charts show the punishing toll of racism for Black boys.

Lives Lived: When a caterpillar chomps through one sausage, one cupcake and one slice of watermelon, it might get a stomach ache. It might also become the star of a top-selling children’s book. Eric Carle, the author of “The Very Hungry Caterpillar,” has died at 91.

Yesterday, McDonald’s began serving the “BTS Meal,” a partnership with the popular boy band that includes a line of branded merchandise. It’s the company’s latest collaboration with music superstars, after similar promotions with Travis Scott and J Balvin last year. Scott’s meal was so popular it led to ingredient shortages in some stores. Unlike the first two partnerships, the BTS meal will be on sale worldwide.

Companies have long tried to maintain relevance “by piggybacking on broader cultural moments,” as The Times’s pop critic Jon Caramanica wrote last year. And thanks to their fans’ loyalty and appetite for merch, musicians make ideal spokespeople. The collaborations are “a way to advertise to young people without all the burdens and potential misfires of actually advertising to young people,” Caramanica writes.

At a McDonald’s in New York yesterday — with a poster advertising the meal in purple, the band’s signature color — there was the usual lunchtime rush. Video monitors showed close-ups of the meal, and employees wore black shirts bearing the band’s logo. It seemed to attract a wide-ranging demographic: Groups of teenagers, as well as a handful of older adults, clutched their purple-flecked paper bags excitedly. — Sanam Yar, a Morning writer

Jackfruit is perfect for a meatless meal, like this tangy sabzi from West Bengal.

The “Friends” reunion on HBO Max is “the superexpressway of memory lanes,” the Times critic James Poniewozik writes.

Fiction by Rivka Galchen and Brandon Taylor as well as a thriller by Bill Clinton and James Patterson are among June’s noteworthy new books.

Late night had a Trump-filled evening.

The pangrams from yesterday’s Spelling Bee were conduction, conduit and induction. Here is today’s puzzle — or you can play online.

P.S. With New York City reopening, The Times’s Summer in the City newsletter is back. Sign up to get it every Wednesday.

“The Daily” is about Belarus forcing down a plane. “Sway” features CNN’s Jake Tapper.

Claire Moses, Ian Prasad Philbrick, Tom Wright-Piersanti and Sanam Yar contributed to The Morning. You can reach the team at [email protected].