Georgia’s new voting law has inspired a heated national debate, involving President Biden, top Republicans and major companies. It has led to a furious exchange of charges and countercharges, sometimes about basic facts.

This morning, I want to try to clarify the fight, by focusing on a few overarching points.

The Georgia law is part of an ongoing effort by the Republican Party to make voting more difficult, mostly because Republicans believe they win when turnout is low.

There is no accurate way to describe this effort other than anti-democratic.

The Republican Party’s justification is “election integrity” — that is, stopping voter fraud. But voter fraud is exceedingly rare. There is no reason to believe it has determined the outcome of a single U.S. election in decades. If anything, the most high-profile recent examples of fraud have tended to involve Republican voters. Yet former President Donald Trump and other Republicans have repeatedly and falsely claimed otherwise.

In truth, the spate of “election integrity” laws over the past decade are mostly a response to Barack Obama’s presidential victories. They created a consensus, among both parties, that Democrats benefited from high turnout (which may not be true). Republicans in many states have responded by trying to make voting harder, especially in cities and heavily Black areas — through onerous identification requirements, reduced voting hours, reduced access to early voting and more.

The new Georgia law largely fits this pattern. It is a response by Republican legislators and Gov. Brian Kemp to their party’s close losses there in the 2020 elections. The law reduces hours for absentee voting, increases ID requirements, and limits the distribution of water and food to voters waiting in line.

One provision seems obviously targeted at Atlanta, the Democrats’ most important source of votes: a new limit on absentee-ballot drop boxes. It is likely to reduce the number of drop boxes in metropolitan Atlanta to fewer than 25, from 94 last year. (My colleagues Nick Corasaniti and Reid Epstein have written a helpful summary of the law.)

“There is no rational motivation for the passage of its new election law other than demonstrating fealty to the false claims elevated by Trump,” The Washington Post’s Philip Bump wrote. Perry Bacon Jr. of FiveThirtyEight put it this way: “The enactment of this law in that state is a particularly alarming sign that the Republican Party’s attacks on democratic norms and values are continuing and in some ways accelerating.” 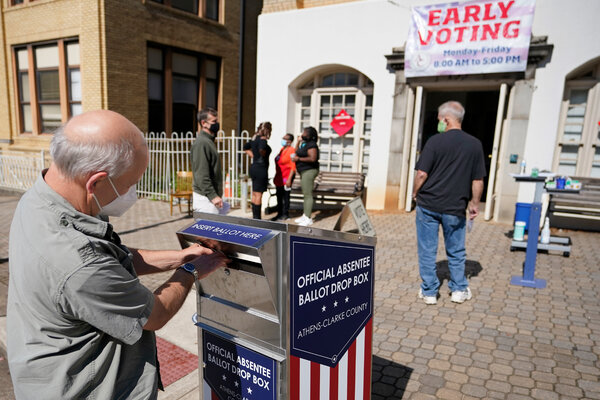 What will the impact be?

But some Democrats have misrepresented parts of the law — and may be exaggerating its likely effects.

Biden, for example, suggested that the law would close polling places at 5 p.m. It won’t. As is already the law, local governments must keep polling places open until 5 p.m. and can keep them open until 7 p.m. (CNN’s Daniel Dale and The Post’s Glenn Kessler have both laid out Biden’s incorrect assertions.)

“The entire existence of the legislation in question is premised on a pernicious lie,” The Bulwark’s Tim Miller wrote. “But for some reason Biden & many other Dems are grossly exaggerating the specifics of what it actually does.” In some cases, Democrats appear to be talking about provisions that the Georgia legislature considered but did not include.

What about the impact of the provisions that really are in the law? That’s inherently uncertain. But The Times’s Nate Cohn has argued that the effects will be smaller than many critics suggest. He thinks it will have little effect on overall turnout or on election outcomes.

He points out that the law mostly restricts early voting, not Election Day voting. Early voters tend to be more highly educated and more engaged with politics. They often vote no matter what, be it early or on Election Day. More broadly, Nate argues that modest changes to voting convenience — like those in the Georgia law — have had little to no effect when other states have adopted them.

Of course, Georgia is so closely divided that even a small effect — on, say, turnout in Atlanta — could decide an election. And the law has one other alarming aspect, as both Nate and The Atlanta Journal-Constitution’s Patricia Murphy have noted: It could make it easier for state legislators to overturn a future election result after votes have been counted.

The new Georgia law is intended to be a partisan power grab. It is an attempt to win elections by changing the rules rather than persuading more voters. It’s inconsistent with the basic ideals of democracy. But if it’s intent is clear, its impact is less so. It may not have the profound effect that its designers hope and its critics fear.

Substack’s Matthew Yglesias offers a helpful bit of context: Georgia’s law is based on “a big lie,” he writes, which certainly is worrisome. But the impact is likely to be modest, he predicts. And for people worried about the state of American democracy, laws like Georgia’s are not the biggest problem. The biggest problem is that the Electoral College, the structure of the Senate and the gerrymandering of House districts all mean that winning public opinion often isn’t enough to win elections and govern the country.

“These big skews,” Yglesias writes, “matter much more than the marginal impact of tinkering with voter ID or absentee ballot rules.”

Biden said that all adults in the U.S. would be eligible for a vaccine by April 19, accelerating the timeline he announced last month.

Nearly 80 percent of teachers and school employees in the U.S. have received at least one vaccine dose, the C.D.C. said.

The biotech company Emergent, which threw out millions of contaminated vaccine doses last week, has a history of ignoring factory errors, The Times found.

Using readers’ photos, The Times put together a virtual memorial to those lost in the past year.

A nonpartisan Senate official has ruled that Democrats can pass multiple bills over the next two years with a straight Senate majority rather than a filibuster-proof 60 votes. The Times’s Carl Hulse calls it “a dagger pointed at Republicans.”

In final weeks of the Trump administration, Representative Matt Gaetz asked for a blanket pardon for himself and congressional allies.

The Arkansas legislature, which Republicans control, overrode the Republican governor’s veto and enacted a law banning some medications and surgeries for transgender minors.

The prosecution and defense focused on the Minneapolis police’s training procedures on day 7 of Derek Chauvin’s trial.

An apparent Israeli mine attack damaged an Iranian military vessel in the Red Sea, an escalation of recent skirmishes.

The Brooklyn district attorney will move to dismiss up to 90 convictions that a former police officer, charged with perjury, had helped secure.

Yahoo Answers — where users sought advice, trivia and explanations — is shutting down after 16 years.

Everyone seems to be talking about vaccine passports: Are they a good idea or a bad idea? “The Argument” podcast and the “Debatable” newsletter discuss the pros and cons.

The decline of religion won’t doom political conservatism, The Washington Post’s Henry Olsen argues, because conservative policies can “be advanced without Christian packaging.”

Lives Lived: The Catholic theologian Hans Küng challenged the Vatican on birth control, abortion and more. Küng was censured for it, all the while exerting his influence globally as a sought-after speaker and prolific author. He died at 93.

In 1971, shortly before Bruce Lee would achieve international acclaim in action films, the actor pitched a show about a Chinese martial artist called “The Warrior.” Studios turned it down. Lee said it was because executives didn’t think an Asian lead could attract American viewership.

A year later, a different television show, “Kung Fu,” would help introduce many Western audiences to martial arts — but the producers passed over Lee for a starring role. They instead chose David Carradine, a white actor with no prior knowledge of martial arts, to play a half-Chinese Shaolin monk in the Wild West.

Now the CW network is rebooting “Kung Fu,” with a predominantly Asian-American cast. The show “is attempting to right some of the wrongs of the original series,” as Max Gao writes in The Times.

Set in modern-day San Francisco, the drama is about a young Chinese-American woman, played by Olivia Liang, who fights crime. “It’s exciting that we get to reclaim it,” Liang told The Times, “and to say, ‘Hopefully, we’re doing it justice, the way it should have always been done.’”

Make stunning croissants at home, with a guide from Claire Saffitz.

These five minutes will make you love the music of the German composer Johannes Brahms.

“Peaces,” by Helen Oyeyemi, follows a couple who embark on a strange train journey. The story “is light, agile and unsentimental,” Alexandra Kleeman writes in a review.

The pangram from yesterday’s Spelling Bee was megahit. Here is today’s puzzle — or you can play online.

Here’s today’s Mini Crossword, and a clue: Those, in Spanish (four letters).

P.S. A hidden haiku from a Times interview with Kyle Abraham, about ballet dancers returning to indoor rehearsals: “Even approaching / touch with a friend is a new / negotiation.”

Today’s episode of “The Daily” is about Biden’s tax policy. On “The Ezra Klein Show,” did Boomers ruin America?

Ian Prasad Philbrick, Tom Wright-Piersanti and Sanam Yar contributed to The Morning. You can reach the team at [email protected].

Opinion | Should We Edit Our Children’s Genes? Would It Be Cruel Not To?