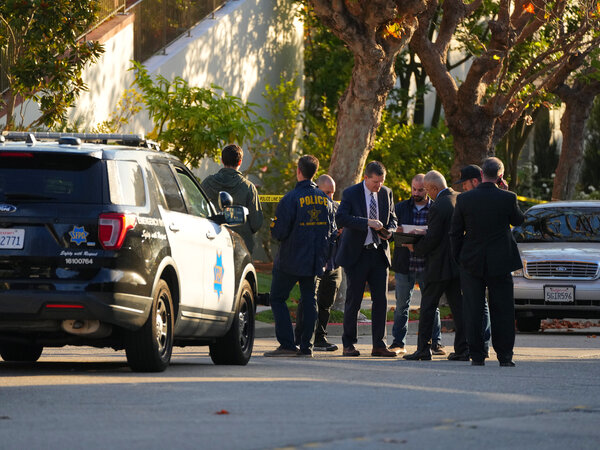 Re “Pelosi’s Husband Is Badly Injured in Hammer Attack by an Intruder” (front page, Oct. 29):

I am sickened by the attack on Paul Pelosi, Speaker Nancy Pelosi’s husband; I am heartbroken that this is where we have devolved to in this country.

It is past time for clearheaded Americans, no matter their political party, to stand up and say, “No more!”

We must find ways to come together, support one another without prejudice, and build the coalitions that reject violence, rhetoric, manipulation and the dehumanization of one another.

No political party in this country is without responsibility for where we are, but one party clearly advocates division, disrespect, violence and the destruction of our democracy.

I don’t understand why an article detailing an apparent planned assassination attempt on the speaker of the House is below the fold in the print edition. Are we that desensitized to violent physical and political attacks?

Nancy Pelosi is second in line for the presidency. This attacker who severely injured her husband with a hammer after screaming “Where is Nancy?” is reportedly steeped in the same election lies and QAnon conspiracy theories espoused daily and viciously at rallies by former President Donald Trump and his followers, like Representative Marjorie Taylor Greene, who has voiced support for executing the speaker. It’s a sad commentary on our society how numb to violence we’ve become.

I hope the speaker stays safe from this MAGA contingent led by the former president and his ilk.

I was very puzzled when I heard about Paul Pelosi being attacked by a man with a hammer. While I am not a fan of Nancy Pelosi, no one deserves to have someone break into their house trying to kill them. I pray that Mr. Pelosi has a speedy and full recovery and that the person who attacked him spends at least the next 20 years in prison.

What initially struck me was how this person was able to access the Pelosi house. I would have thought there would have been some sort of security detail there regardless of whether Ms. Pelosi was present.

The speaker of the House and people in similar high positions in the government, such as the Supreme Court justices and major cabinet officials, should always have at least one armed agent at their residences in the Washington, D.C., area and in their home districts, whether they are there or not.

At a minimum the property should be under 24-hour security monitoring so a police unit can be dispatched to the residence within a matter of minutes. A call to 911 should not have been needed.

The attack on Speaker Nancy Pelosi’s husband, Paul Pelosi, was horrific, but in many ways it was predictable in the current climate of far-right rhetoric filled with warped political views and intense hatred toward forces they identify as the enemy — all Democrats.

This sickening assault is largely the result of such extremists being incited by right-wing propaganda on platforms like Fox News as well as prominent Republicans in Congress and across our country.

They have used the most inflammatory rhetoric and often contributed to extremist views that include harassment, targeted threats and calls to violent action. This is the direct result of Donald Trump’s Big Lie. Those forces stoking toxic conspiracy theories include dozens of Republican candidates for office.

I urge all responsible Americans to vote for Democratic candidates to block the Republican Party from completing its destructive agenda. There are many important issues in this midterm election, but none more critical than the salvaging of our democracy that is under assault.

Why has Nancy Pelosi been so viciously demonized by MAGA zealots? Perhaps the fact that she has repeatedly stood up to Donald Trump, tearing up his State of the Union address and calling him out fearlessly. The fact that few of her male colleagues have been able to confront him so effectively is a major reason that he has directed his base to see her as his worst enemy.

The tactic to “monitor” voters with armed vigilantes drives a new intensity of bullying, increasingly aimed at poll workers. Ordinary citizens now fear for their families if they simply participate in elections with integrity.

It takes only a few actual assaults to terrorize the nation and drive good people from public life.

The announcement by Attorney General Merrick Garland that the Justice Department would not use subpoenas or seek court orders that would require journalists to provide information leading to the revelation of their confidential sources is an enormous step in the public interest.

Many journalists from this and other publications have risked and sometimes endured lengthy jail sentences to protect their sources. Their willingness to do so to ensure that the public would receive significant information about misconduct in and out of government has been essential.

Mr. Garland deserves the thanks and appreciation not only of journalists but also the public generally.

Pressure is building to bring back Russian athletes into international competitions. As you report, the president of the International Olympic Committee, Thomas Bach, has called on sports federations to “choose the path of unity and peace,” and not make athletes the victims of their government’s bellicose policies.

This is a noble enough sentiment for an ignoble world — though cynics would say it is just the business-as-usual, look-the-other-way stance already adopted in professional sports in which Russians are prominent such as hockey, tennis and soccer.

But if Russian athletes are now to be viewed as benign independent contractors, could we not at least urge them to make a small but significant gesture that would help restore some of the tarnished Olympic ideals?

Could they take a moment from their training and call for the humanitarian release of the W.N.B.A. player Brittney Griner, sentenced to nine years in a Russian prison colony for possession of cannabis oil? An N.H.L. star and Olympian such as Alex Ovechkin, who has supported Vladimir Putin in the past, now has an opportunity to use his fame and influence in a good cause. It is well past time to do so.

If, on Election Day, a majority of voters consider the price of gas more important than the attempted coup on Jan. 6, then to paraphrase William Faulkner, we do not deserve to survive as a democracy and probably will not.