Many Americans have lost the comfortable bliss of not paying attention to politics.

One summer day five years or a millennium ago, a boorish TV businessman, a B-list personality with a taste for the tabloid, announced one of those publicity-stunt bids for the presidency you usually hear about only in jokey montages at the end of the local news. Then, somehow, there was a catch in the fabric of time. Maybe we’d misused our technology or maybe it was cosmic retribution for our decadence, or maybe just a bad roll of the dice. Whatever it was, that day our collective attention became fixed upon this one man, and there we have remained ever since. We are stuck in eternal orbit around an expanding black hole, irresistibly sucked in.

That was only the beginning; each day since, he has come to dominate more of our lives. Now you hear from him anywhere, everywhere, at any time. He’s there on every screen and status update, in every conversation, dream, nightmare. As subtext, he lurks within the arts, in sports, in the weather reports, in houses of worship. For some of us, hardly an hour goes by in which we are not forced to think about the person occupying the White House. Even now, on the precipice of an election that may finally offer an exit from this infinite loop, the end of having to think about Trump seems nowhere close.

Sometimes I wonder about the opportunity cost of all this. If you could count up the time and energy we have spent considering this single person, how much global productive capacity would it amount to? What could we have done instead with all that attention? And what do we have to show for it?

I am no Trump fan, so I am tempted to say it’s all been a waste. I’d like to say that the biggest loss we have experienced under Trump is just this — the loss of our attention, a quiet focus that may otherwise have been put to use fixing one of the planet’s many terrible woes. In the closing days of the presidential campaign, Trump’s insatiable appetite for attention, and our inability to resist feeding it, has even become an argument against his re-election. Two-thirds of Americans report feeling “worn out” by the news. If Joe Biden wins, “it just won’t be so exhausting,” Barack Obama said at a rally the other day. “You might be able to have a Thanksgiving dinner without having an argument.”

That would be nice; I am as excited as anyone for a boring president.

Yet when I got to thinking about how Trump has redirected our attention, I realized I was mistaken. All the time we spent focused on him has not been for nothing; there has been an unexpected upside to his omnipresence. Even as Trump’s presidency has been tiring — not to mention profoundly cruel, deadly and embarrassing for our nation — it has also been something else: motivating.

With nearly every tweet, Trump gave us a new 10-car pileup from which we couldn’t look away. But in the process of making us look at him, Trump forced many of us to actually look for the first time. By turning us into a nation of rubbernecks, he has pushed us to reckon with why things are crashing in the first place and to examine the faulty infrastructure of our democracy.

If we’re lucky, this will be his only lasting legacy. For many of us, Trump has shattered the comfortable bliss of not having to pay attention.

Trump got us to recognize a truth long ignored in American politics: that a competent government is important. American greatness and American goodness can never again be taken for granted. His inept reign has proved that the country cannot run on autopilot, and there is no longer any basis for the lazy idea that America will always, in some automatic and reflexive way, “work things out.”

Trump’s gutting of federal agencies, from the Environmental Protection Agency to the State Department to the Centers for Disease Control and Prevention, proved, through their resulting failures and missteps, the importance of governmental capacity and competence. It is now tragically clear what happens if the federal government is left to wither, if expertise and experience is undermined and overruled, and if honesty, decency, integrity and fairness are abandoned by public officials: People die, people lose their jobs, hate and mistrust fester, long-term problems become sudden emergencies, and the country steadily loses unity and moral standing.

It’s difficult to remember now, but before Trump, to a lot of Americans much of what the federal government did could be relegated to an incidental corner of life. Sure, politics was a blood sport on Twitter and cable TV, but for those other than politics junkies, the Obama years were defined by a deep complacency and cynicism toward the democratic process. The midterm elections of 2010 and 2014 and the presidential races of 2012 and 2016 were low-engagement, low-turnout affairs. You might even say that American political life in the past decade has been determined more by the inaction of those who didn’t participate than by the actions of those who did.

Obama frequently called on Americans to rise above political apathy. Yet beyond his own campaigns, his policies rarely generated mass enthusiasm for the political process. His was an administration of incremental progress, averted disaster and quiet competence. Those are salutary goals, but as Trump would say, they’re boring — it’s difficult to prompt much excitement about the recession that didn’t turn into a depression, the health care plan that solved some problems but not others or the pandemic that wasn’t a national catastrophe. 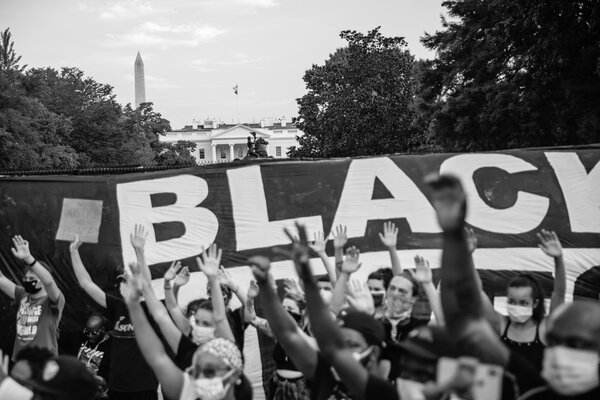 From Day 1, there was nothing quiet or incremental about Trump. He attacked American institutions frontally and clamorously, shocked us into realizing their fragility and compelled us to stand up against his wrecking ball.

The backlash was swift. When Trump attacked the media, people subscribed in droves. Even as he made moves to dismantle Obamacare, the law remained as popular as it had ever been, scuttling the effort to repeal it. When Trump spewed racist ideas from the White House, many Americans recoiled. For the first time, more Americans now favor expanding immigration instead of restricting it, and a majority of Americans say they support Black Lives Matter. The more that Trump has pushed white identity politics, the less popular it has become.

It wasn’t just public opinion that shifted. The backlash prompted political action. In 2018, a wave of candidates across the country, a lot of them women and people of color, ran for office for the first time. Nearly 120 million Americans voted that year, the highest turnout for the midterms in more than 100 years. This year’s vote could shatter all records. Already, the number of people voting early has far surpassed 2016’s early voting turnout; experts say overall turnout could reach the highest rate since the election of 1908.

Then there are the other, less direct ways Trump has shaken us out of complacency. Would the #MeToo movement have had the same impact if we hadn’t elected a president who had been accused repeatedly of sexual assault? Would lawmakers have begun questioning the role that tech companies play in our lives if the man in the White House hadn’t been a geyser of social media-fueled misinformation? Would Democrats be talking about far-reaching reforms for our democracy — eliminating the Electoral College, expanding the Supreme Court, statehood for the District of Columbia and Puerto Rico — if we weren’t shocked by the dreadful chief executive this broken system has given us?

I don’t think so, at least not to the degree we are now. The Trump years have been among the most disastrous in recent American history. But they weren’t for naught. One day, inshallah, we will look back on this time as the beginning of the great American awakening.

Farhad wants to chat with readers on the phone. If you’re interested in talking to a New York Times columnist about anything that’s on your mind, please fill out this form. Farhad will select a few readers to call.

The Times is committed to publishing a diversity of letters to the editor. We’d like to hear what you think about this or any of our articles. Here are some tips. And here's our email: [email protected].

Opinion | Coronavirus Variants Don’t Have to Be Scary. Still, Mask Up.