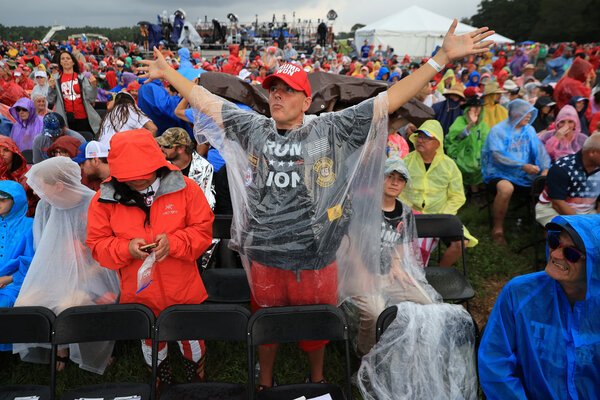 By Thomas B. Edsall

Just who believes the claim that Trump won in 2020 and that the election was stolen from him? Who are these tens of millions of Americans and what draws them into this web of delusion?

Three sources provided The Times with survey data: The University of Massachusetts-Amherst Poll; P.R.R.I. (the Public Religion Research Institute); and Reuters-Ipsos. With minor exceptions, the data from all three polls is similar.

Alexander Theodoridis, a political scientist at the University of Massachusetts, summed it up:

About 35 percent of Americans believed in April that Biden’s victory was illegitimate, with another 6 percent saying they are not sure. What can we say about the Americans who do not think Biden’s victory was legitimate? Compared to the overall voting-age population, they are disproportionately white, Republican, older, less educated, more conservative, and more religious (particularly more Protestant and more likely to describe themselves as born again).

P.R.R.I. also tested agreement or disagreement with a view that drives “replacement theory” — “Immigrants are invading our country and replacing our cultural and ethnic background” — and found that 60 percent of Republicans agreed, as do 55 percent of conservatives.

The Reuters/Ipsos data showed that among white Republicans, those without college degrees were far more likely to agree “that the 2020 election was stolen from Donald Trump,” at 69 percent, than white Republicans with college degrees, at a still astonishing 51 percent. The same survey data showed that the level of this belief remained consistently strong (60 percent plus) among Republicans of all ages living in rural, suburban or urban areas.

With that data in mind, let’s explore some of the forces guiding these developments.

Right-wing authoritarianism played a significant role in the 2016 U.S. presidential election. In subsequent years, there have been numerous ‘alt-right’ demonstrations in the U.S., including the 2017 “Unite the Right” rally in Charlottesville that culminated in a fatal car attack, and the 2021 Capitol Insurrection. In the U.S., between 2016 and 2017 the number of attacks by right-wing organizations quadrupled, outnumbering attacks by Islamic extremist groups, constituting 66 percent of all attacks and plots in the U.S. in 2019, and over 90 percent in 2020.

How does authoritarianism relate to immigration? Womick provided some insight in an email:

group-based dominance. I think group-based dominance as the distinguishing factor of this group is highly consistent with what happened at the Capitol. These individuals likely felt that the Trump administration was serving to maintain group-based hierarchies in society from which they felt they benefited. They may have perceived the 2020 election outcome as a threat to that structure. As a result, they turned to aggression in an attempt to affect our political structures in service of the maintenance of those group-based hierarchies.

In their paper, Womick and his co-authors ask

Their answer is twofold:

They describe negative affect as “feeling sad, worried, or enraged.” Definitions of “meaning in life,” they write,

include at least three components, significance, the feeling that one’s life and contributions matter to society; purpose, having one’s life driven by the pursuit of valued goals; and coherence or comprehensibility, the perception that one’s life makes sense.

It may seem ironic that authoritarianism, a belief system that entails sacrifice of personal freedom to a strong leader, would influence the experience of meaning in life through its promotion of feelings of personal significance. Yet, right wing authoritarianism does provide a person with a place in the world, as a loyal follower of a strong leader. In addition, compared to purpose and coherence, knowing with great certainty that one’s life has mattered in a lasting way may be challenging. Handing this challenge over to a strong leader and investment in societal conventions might allow a person to gain a sense of symbolic or vicarious significance.

From another vantage point, Womick and his co-authors continue,

perceptions of insignificance may lead individuals to endorse relatively extreme beliefs, such as authoritarianism, and to follow authoritarian leaders as a way to gain a sense that their lives and their contributions matter.

In the authors’ view, right-wing authoritarianism,

In his email, Womick expanded on his work: “The idea is that perceptions of insignificance can drive a process of seeking out groups, endorsing their ideologies and engaging in behaviors consistent with these.”

should eventually promote a sense of significance (as insignificance is what drove the person to endorse the ideology in the first place). Endorsing right wing authoritarianism relates to higher meaning in life, and exposing people to authoritarian values causally enhances meaning.

In “Race and Authoritarianism in American Politics,” Christopher Sebastian Parker and Christopher C. Towler, political scientists at the University of Washington and Sacramento State, make a parallel argument:

Taking a distinct but complementary approach, David C Barker, Morgan Marietta and Ryan DeTamble, all political scientists, argue in “Intellectualism, Anti-Intellectualism, and Epistemic Hubris in Red and Blue America” that

Epistemic hubris — the expression of unwarranted factual certitude” is “prevalent, bipartisan and associated with both intellectualism (an identity marked by ruminative habits and learning for its own sake) and anti-intellectualism (negative affect toward intellectuals and the intellectual establishment).

In addition, according to the Barker, Marietta and DeTamble, “The growing intellectualism of Blue America and anti-intellectualism of Red America, respectively, may partially explain the tendency by both to view the other as some blend of dense, duped, and dishonest.”

In an email, Marietta wrote:

The evidence is clear that the hubris driven by intellectual identity and the hubris driven by anti-intellectual affect lower our willingness to compromise with those who seem to lack character and honesty. I suspect the divide in perceptions, but unanimity in hubris, feeds the growing belief that democracy is failing and hence anti-democratic or illiberal policies are justified.

Marietta reports that he and his colleagues

conducted a series of experiments to see what happens when ordinary citizens are faced with others who hold contrary perceptions of reality about things like climate change, or racism, or the effects of immigration. The results are not pretty.

Once they realize that the perceptions of other people are “different from their own,” Marietta continued,

Americans are far less likely to want to be around them in the workplace, and are far more likely to conclude that they are stupid or dishonest. These inclinations are symmetrical, with liberals rejecting conservatives as much (or sometimes more) than conservatives reject liberals. The disdain born of intellectual identity seems to mirror the disdain arising from anti-intellectual affect.

I asked Barker about the role of hubris in contemporary polarization and he wrote back:

At the same time, Barker continued,

the intellectual Left really does see the G.O.P. as a bunch of deplorable rubes. They absolutely feel superior to them, and they reveal it constantly on Twitter and elsewhere — further riling up the “deplorables.”

The populist/anti-intellectual Right absolutely believe that the intellectuals are not only out of touch but are also ungodly and sneaky, and therefore think they must be stopped before they ruin America. Meanwhile, the intellectual Left really do believe the Trumpers are racist, sexist, homophobic (and so on) authoritarians who can’t spell and are going to destroy the country if they are not stopped.

What is a critical factor in the development of hubris? Moral conviction, the authors reply: “The most morally committed citizens are also the most epistemically hubristic citizens,” that is, they are most inclined “to express absolute certainty regarding the truth or falsehood” of claims “for which the hard evidence is unclear or contradictory.”

Moral conviction plays a key role in the work of Clifford Workman, a postdoctoral fellow at the Penn Center for Neuroaesthetics at the University of Pennsylvania. Workman, Keith J. Yoder and Jean Decety, write in “The Dark Side of Morality — Neural Mechanisms Underpinning Moral Convictions and Support for Violence” that “People are motivated by shared social values that, when held with moral conviction, can serve as compelling mandates capable of facilitating support for ideological violence.”

Using M.R.I. brain scans, the authors “examined this dark side of morality by identifying specific cognitive and neural mechanisms associated with beliefs about the appropriateness of sociopolitical violence” to determine “the extent to which the engagement of these mechanisms was predicted by moral convictions.”

In a striking passage, Workman, Yoder and Decety argue that

While violence is often described as antithetical to sociality, it can be motivated by moral values with the ultimate goal of regulating social relationships. In fact, most violence in the world appears to be rooted in conflict between moral values. Across cultures and history, violence has been used with the intention to sustain order and can be expressed in war, torture, genocide, and homicide.

What, then, Workman and his co-authors ask, “separates accepting ‘deserved’ vigilantism from others and justifying any behavior — rioting, warfare — as means to morally desirable ends?”

Their answer is disconcerting:

People who bomb family planning clinics and those who violently oppose war (e.g., the Weathermen’s protests of the Vietnam War) may have different sociopolitical ideologies, but both are motivated by deep moral convictions.

The authors propose two theories to account for this:

Moral conviction may function by altering the decision-making calculus through the subordination of social prohibitions against violence, thereby requiring less top-down inhibition. This hypothesis holds that moral conviction facilitates support for ideological violence by increasing commitments to a ‘greater good’ even at the expense of others. An alternative hypothesis is that moral conviction increases the subjective value of certain actions, where violence in service of those convictions is underpinned by judgments about one’s moral responsibilities to sociopolitical causes.

In a 2018 paper, “A multilevel social neuroscience perspective on radicalization and terrorism,” Decety, Workman and Robert Pape ask: “Why are some people capable of sympathizing with and/or committing acts of political violence, such as attacks aimed at innocent targets?”

Opinion | A Horoscope for 2021 and Beyond