Home » Analysis & Comment » Opinion | The Water Crisis in the Southwest 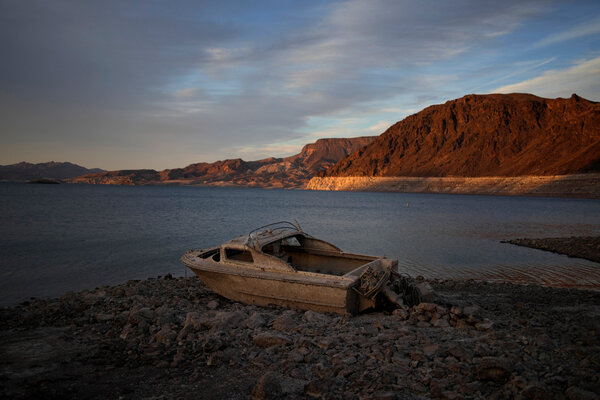 Re “The Coming Crisis on the Colorado River,” by Daniel Rothberg (Sunday Opinion, Aug. 7):

The spigot that turns on water for Lake Mead and Lake Powell reservoirs resides high in the mountains of Colorado where dense snowpack builds up during the winter and melts slowly during the summer.

Snowmelt runoff, unlike rainfall that becomes widely dispersed, is channeled into creeks and small streams that eventually combine and funnel into the Colorado River. The snowpack is disappearing.

Ten years ago I was at Lake Mead’s now-disappeared Overton Beach Marina and read a sign on a palm tree that said, “Boat Slips Available.” Behind it was a vast landscape of dry and cracked lake bed. The “coming crisis on the Colorado River” has been arriving for some time now.

For decades people in the urban Southwest have been living off federal money for subsidized water, with dams, aqueducts and pumping systems watering hundreds of golf courses, a swimming pool for every house and citrus groves in the desert.

When the water level of Lake Mead reaches 1,042 feet above sea level, as it did recently, this false idea of a “desert miracle” confronts the true reality of a “dead pool” and the meaning of climate change.

Judith Nies
Cambridge, Mass.
The writer is the author of “Unreal City: Las Vegas, Black Mesa and the Fate of the West.”

The West is drying and the East is flooding: Lake Mead, the vital sign of the Colorado River, has fallen to historic lows, and Kentucky has the opposite problem, overwhelmed by floodwaters.

At a time when the country is already divided in enough ways, I hope that water can be a theme we can all rally around. Whether too much or too little, water touches us all.

Certainly, resolving the Colorado River crisis — with its roots now gnarled in agriculture, urban growth, economics, politics and climate change — is a massive undertaking that will not happen in a day or even a decade. It requires individuals as well as institutions.

A small action, whether to conserve water at home or to support a policy at the ballot box, shows commitment. To those of us who live in the West, it’s more than just a drop in the bucket. It’s good leadership, and it’s good stewardship.

Robert B. Sowby
Provo, Utah
The writer is a water resources engineer and a professor at Brigham Young University.

Should Liz Cheney Run for President?

The heroic stance that soon-to-be-former Representative Liz Cheney has taken will go down in history as a true “profile in courage,” but her trajectory should not include a run for president.

Opinion | Cash Will Soon Be Obsolete. Will America Be Ready?

Opinion | Rise Up and Save Us, Joe Biden