Home » Analysis & Comment » Opinion | The Lady and the Trump

WASHINGTON — I’ve been riveted all week by the spectacle of the most famous blond phenom on the planet, a child isolated and miserable living inside a national landmark, lashing out and spiraling into self-destructive acts.

But eventually I had to turn off the new season of “The Crown,” focusing on Princess Diana, and drag my attention back to Donald Trump, who is trashing this place before checking out like he’s Axl Rose at a Four Seasons.

Diana and Donald shared a few things in common: their toxic tango with the press, their psychic connection with their fan base, their willingness to blow up norms. They were both “unpredictable meteors,” as Tony Blair once described Di. They both savored sitting in their rooms glued to their own coverage on TV, dialing up their chosen reporters to control the narrative. They were both unhappy at the top, fretting about being undercut. Diana almost upended the monarchy and Donald is doing his worst to upend democracy.

That’s where the similarities end. In terms of empathy, hugging the afflicted, the radiant Diana and the radioactive Donald are opposites. And while watching her fractured fairy tale breaks your heart, watching his fractious exit makes your head hurt. The young princess feared she was going mad amid barking corgis; the 74-year-old president wallows in his barking madness.

On Friday afternoon, Trump continued embarrassing himself and the nation when he finally emerged, after sulking in his tent for days, and asserted that he had won the election. He blamed Big Pharma, Big Tech and the media for his woes.

He sent out a fund-raising message praising the news conference with his lawyers, a dripping Rudy Giuliani and a rabid Sidney Powell, laying out the absurd phantom global conspiracy that is thwarting Trump’s re-election.

Then Trump met with Michigan G.O.P. officials, brazenly trying to subvert democracy and claw back a swing state, or even just to feed his ego by delegitimizing the election in the eyes of his base. But the Michigan lawmakers came out of the White House and said they would “follow the normal process” that has Joe Biden ahead even as the governor of Georgia certified the results there for Biden.

It would be merely pathetic to watch Trump toss nails on the road behind him if it weren’t so dangerous.

Biden needs all the air in his tires and a full tank of gas when he pulls that Corvette into the White House driveway in two months, because this country is shot to hell and running on empty.

Trump is sabotaging the transition as the pandemic rages, engaging in midnight maneuvers like ending several emergency lending programs that could buoy the economy and attempting to ravage Alaska’s wildlife refuge.

Republicans remain as mute and frightened of Trump as ever. Mitch McConnell could stop this nonsense with one sentence: “We’re moving on and recognizing Joe Biden as president-elect.” But he refuses to, letting the damage to the country unspool to protect his own standing with the base and to hold onto those two Senate seats in Georgia that make him majority leader.

It’s outrageous that Congress left town for the holidays this weekend without passing Covid relief. But Republicans, who are already all about setting themselves up for the next election, prefer to put Biden in a bind and later trash him for big spending. Never mind that they’re leaving millions of Americans in the lurch.

After watching unfeeling Republicans, it’s not really an escape to turn on “The Crown” and watch that unfeeling bunch — Margaret Thatcher and the royals.

Peter Morgan, the writer of “The Queen” and creator of “The Crown,” spent a large chunk of his career refurbishing the queen’s reputation after the disastrous period following Diana’s death, when Blair had to beg Queen Elizabeth to show more emotion.

But in this fourth season of “The Crown,” Morgan presents a more brittle queen, as the bulimic Diana is crying out for help and the Boss blows her off, feeling Charles and Diana are spoiled, immature and letting the side down.

Diana, perfectly played by Emma Corrin, describes the palace as “a cold frozen tundra, an icy dark, loveless cave with no light, no hope, anywhere, not even the faintest crack.”

Morgan’s portrayal of Charles is rough, as well. The Prince of Wales is too in love with Camilla, too jealous of Diana, and too wounded from his upbringing to give his marriage a real chance.

When I covered the visit of Charles and Diana to Washington in 1985, the couple seemed happy. But problems were brewing. An insecure future king was sure to be jealous of a wife who sluiced all the attention away simply by tucking down her chin and flashing a look from under her eyelashes. And it was clear that Diana, who was called “Duch” as a girl because she always acted like a duchess, was learning how to channel her electric star power.

The gala at the Reagan White House — Duch meets Dutch — was a showcase for Diana, shimmering in blue velvet and a pearl choker, not Charles. Nancy Reagan had gathered a pantheon of leading men for the princess — Mikhail Baryshnikov, Clint Eastwood, Tom Selleck and, as a dancing partner when the Marine Band played “Night Fever,” John Travolta. 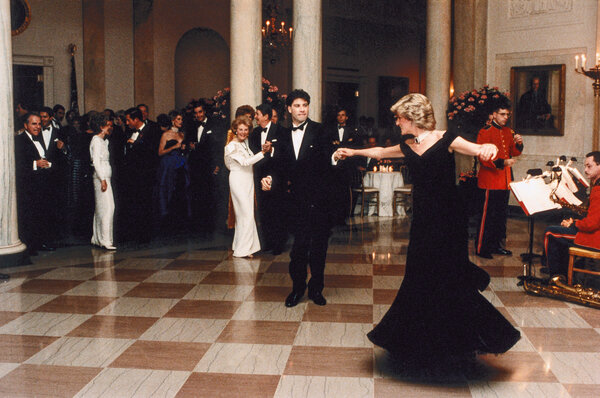 In “The Art of the Comeback” in 1997, Trump said that his only regret “in the women department” was that he didn’t date Diana after her divorce. He said “she lit up the room with her charm, her presence,” and was “a dream lady.”

Dream on, Donald. Of his wooing, Diana told a friend, “He gives me the creeps.”

Di, we know how you feel.