Readers disagree about whether the president should seek a less ambitious bipartisan bill, as Republican senators urged at a meeting with him. 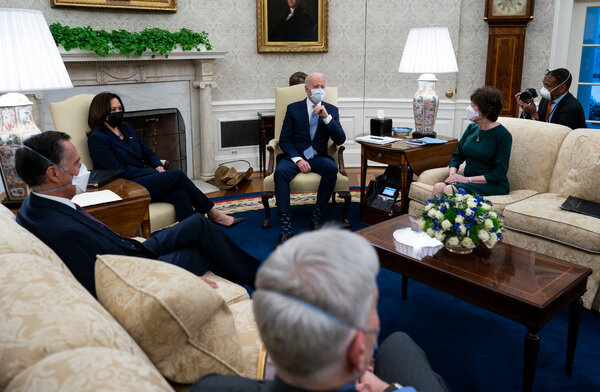 At last, the closest thing we have seen to a negotiation in years.

If President Biden is truly serious about bipartisanship, he can’t possibly be expecting to get the $1.9 trillion package through, and the 10 Republicans similarly about their $600 billion one.

The more “targeted” check distribution is probably the way to go, and will probably help get the support of Democrats in conservative-leaning states who are up for re-election in 2022 and 2024, and I am sure some of the items the Republicans would like to see go away are — !?! — negotiable, too.

It’s not as if the $15-an-hour minimum wage and some of the other lightning rod issues can’t be done by budget reconciliation — if that is what it takes — in a month or two.

If you are asking $1.9 million for your house and a buyer offers $600,000, you would not start a negotiation. Anyone with common sense would know that the offer is not serious, and you would be wasting your time negotiating.

The so-called bipartisan proposal from the 10 G.O.P. senators is not serious, and Democrats should not have given it credibility by meeting with them.

Democrats, you got elected to do things, and you will betray that trust if you put the siren song of bipartisanship ahead of the need to go big in order to confront the big problems we face.

President Biden should try to work with the 10 Republican senators and focus on the most important parts of his proposal — unemployment insurance, help to states and cities, vaccine distribution, help to small businesses and child tax credits.

The $1,400 payments to families making more than $100,000 a year are completely unnecessary, and only burden our children and grandchildren with more debt. The minimum wage is a separate issue that should be part of another bill.

The president has a large to-do list, including infrastructure, tax and immigration reform, and it would be very valuable to have a working bipartisan majority.

Senator Rob Portman has warned President Biden not to use budget reconciliation to pass urgently needed Covid relief legislation, lest he “poison the well” and set the president down “a path of partisanship.”

Funny how these concerns did not apply when Mr. Portman and his Republican colleagues used the identical process to pass the disastrous 2017 Trump tax bill.

What we lose when we lose the office

Opinion | It’s Time for America to Reinvest in Public Housing