Over the weekend, the people of Chile voted in a historic election to select the members of a body tasked with drafting a new Constitution to replace the one written in 1980 under the dictatorship of Augusto Pinochet.

The final tally dealt a severe blow to the followers of General Pinochet, many of whom make up the center-right and right-wing coalition Chile Vamos, backed by the current president, Sebastián Piñera, which won just 37 of the 155 seats for the Constitutional Convention. Chileans, especially the young, also rejected the traditional center-left parties as insufficiently responsive to people’s craving for a more egalitarian society and overly compromised with the status quo.

The victors were a group of parties of a new-left coalition, Apruebo Dignidad (I Approve Dignity), which elected 28 representatives, and numerous independent candidates who had been active in the ongoing protests calling for reforms in education, health and pensions, and an end to the neoliberal economic model that has dominated Chile for almost half a century. The independent, left and center-left candidates secured a combined 101 seats, more than two-thirds of the Constitutional Convention. They would have enough power to propose broad economic reforms to land and water rights, the pensions system and the exploitation of natural resources. Chile is one of the most unequal countries among advanced economies.

All signs indicate that the foundational document they will draft will enshrine principles of civic participation, justice, gender equality and Indigenous rights that have long eluded this South American nation.

The election results represent a stunning outcome that nobody could have predicted when a huge protest movement rocked the conservative government of Mr. Piñera in October 2019.

As the 2019 uprising grew larger and more adamant, there was one major demand that united its heterogeneous participants: the need to replace the Constitution that had been fraudulently approved during General Pinochet’s lethal dictatorship — a need that responded to a deeper existential crisis over inequality in Chilean society that had been brewing for decades.

Even after Pinochet was forced to retire as president in 1990, his Constitution continued to be a straitjacket that allowed a minority of right-wing legislators and an entrenched oligarchy to constrain radical attempts to create a more equitable and less repressive society.

The October 2019 revolt terrified the ruling coalition of conservative politicians, and they reached an agreement with center-left parties holding a majority in Congress to call a referendum asking the nation whether it wanted a new Constitution. It was a way, they thought, of saving the country’s institutions and guaranteeing a peaceful outcome to popular demands.

To make certain that they would wield a veto over the proceedings, many of General Pinochet’s followers in the Senate and Congress wrote into the agreement that the final document produced by the Constitutional Convention would have to be approved by a two-thirds majority. They did so confident in their calculations that they would always be able to command more than one-third of the delegates.

That calculation backfired spectacularly over the past weekend as Chile Vamos, despite an enormous financial advantage, lost badly to independent and opposition candidates, and was sidelined from decision-making when it comes to the new charter. The defeat is all the more striking because the coalition also lost most of the mayor’s and governor’s races that were being held simultaneously.

The presence of the anti-establishment composition of the body that will write the new Constitution ensures there will be a series of drastic alterations in the way Chile dreams of its future. Two provisions already exist in the electoral process.

One stipulates that gender parity be achieved in the apportionment of the 155 delegates, so that women will not be greatly outnumbered by men in the halls of power. A majority of the 77 women elected, along with their male allies, can now fight successfully for reproductive rights in a country where abortion has traditionally been restricted and criminalized. 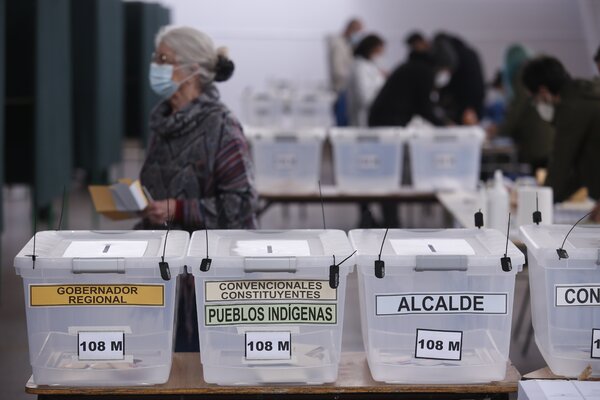 The other provision reserves 17 of the seats at the convention for Indigenous peoples, who form 9 percent of Chile’s 19 million people. Chile can henceforth proclaim itself a plurinational, multilingual republic. It is a historic triumph for the original inhabitants of that land like the Mapuche, who have faced oppression since the Spanish conquest in the 16th century. The conflicts with the Mapuche, especially over ancestral land rights, have recently led to a series of often violent skirmishes in the south of the country.

Other reforms seem likely: reining in police violence; a reformulation of economic and social rights that reduces the dominance of an obscenely rich elite; increased protection of the environment; the rooting out of endemic corruption; and the end of discrimination against L.G.B.T.Q. people.

Just as crucial is the vigorous national conversation that will ensue, open to the citizenry and attentive to the input from those who spearheaded the revolt. A return to a Chile where the profits of the few mattered more than the well-being of the many will not be acceptable.

There are, however, some disquieting signals ahead. Only 43 percent of the population voted in this election, compared with the more than 50 percent who turned out last year and overwhelmingly approved the idea of creating a new Constitution.

This absenteeism can be partly attributed to the pandemic (which also stopped me and my wife from traveling to Chile to cast our votes) and partly to the widespread apathy of vast sectors of the electorate, particularly among the poorest families. Finding ways of enthusing those who do not trust that any change will ever benefit them is a challenge that must be met.

The other problem is that though nearly 75 percent of the delegates embody a progressive agenda, they are fragmented and tend to squabble among themselves, making it difficult to reach a consensus on how far to carry out the reforms Chile requires.

None of this detracts from encouraging the message and example that Chile sends out to the world at a time of rising authoritarianism: As humanity faces a terrible existential crisis of its own, what we need is not less democracy but more democracy, more participation, more of us daring to believe that another world is possible.

Ariel Dorfman is the Chilean-American author of the play “Death and the Maiden” and, recently, of the novels “Darwin’s Ghosts” and “Cautivos.” He is an emeritus professor of literature at Duke University.

Opinion | Americans, It’s Time to Get Comfortable With Platonic Touch

Where the Virus Is Less Bad