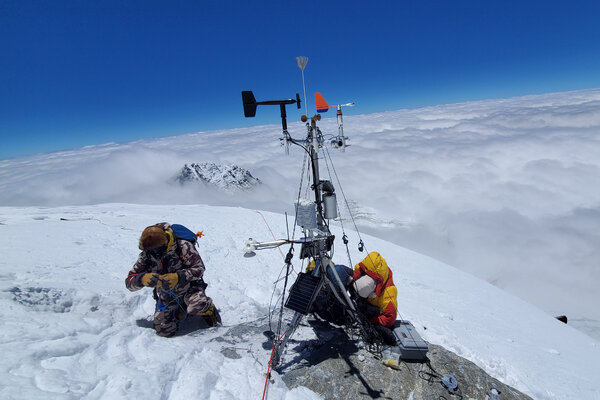 Mr. Wilkinson is a writer and co-director of the documentary “The Sanctity of Space.”

A new landmark greeted mountaineers nearing the summit of Mount Everest this spring: a seven-foot-tall mast of scientific instruments bolted into the coarse shale of an outcropping known as Bishop Rock. It’s only about 130 vertical feet from the 29,032-foot summit, where one can look down the opposite side of the mountain, into China, and see another weather station about an equal distance from the top.

These installations are the highest outposts of two networks of automatic weather stations that stretch up Everest’s two popular routes. This being Everest, where controversy is no stranger, it wasn’t long before a quibble arose over bragging rights. Which station is higher: the one installed in China or the one in Nepal? The two countries share a border that divides the mountain, and officials from both claimed the honor for their nation. Perhaps Guinness World Records should investigate.

There are, of course, bigger issues at stake. With the arrival of this human infrastructure near the top of the world, our understanding of climate change on Mount Everest has reached an inflection point. The so-called Third Pole is home to the highest mountains on Earth and contains one of the largest coverings of ice outside of the North and South Polar regions. Its glaciers feed more than 10 river systems and provide water to some two billion people, roughly a quarter of the world’s population.

As these glaciers disappear, cooperation between Nepal and China will be important in understanding the rate, extent and impact of the warming in this remote and forbidding region. China has not always been inviting to outsiders on its side of Everest, which has remained closed to foreign mountaineers since the Covid pandemic began in 2020. But researchers are hopeful both countries will collaborate.

Warming in this Third Pole is happening at roughly double the global rate and has been especially pronounced over the past 60 years. This century is becoming the warmest period in these high mountains in 2,000 years, making the region an important ground for research in the effort to avert climate disaster.

This year, a comprehensive climate assessment for the Third Pole warned that two-thirds of the present mass of the glaciers in the region around Everest could disappear by the year 2100. Yet as the assessment noted, there are significant “knowledge gaps” in climatic data coming from the region. This is particularly true in high-altitude environments where the annual snows collect atop the region’s myriad glaciers.

The difficulties in collecting reliable geophysical data in this daunting place are obvious and manyfold. But in recent decades a growing number of scientists have undertaken the challenge. In the spring of 2019, the National Geographic Society, working with the government of Nepal and the watch maker Rolex, helped organize a multidisciplinary expedition of more than 30 scientists from universities and organizations around the world. I was a member of that expedition, helping to document its work. New discoveries from our undertaking and from others are yielding an astonishing picture of a landscape in flux.

Opinion | OSHA Can Do More to Protect Americans From Covid-19