President Trump wanted to make history, and he has, plunging to new depths of ignominy. He has become the first president to be impeached twice.

Yet 75 percent of Republican voters still said, in a Morning Consult/Politico survey released Wednesday, that they approved of his presidency. Trump remains the overwhelming favorite among Republicans for the 2024 G.O.P. nomination, with 42 percent support, followed by Mike Pence, Donald Trump Jr. and Ted Cruz.

As I was watching the impeachment debate and writing this column, I had a call from a childhood friend, and at the end of the call he mentioned what he considered good news: Trump was preparing to crack down on “that liberal media” with its “gays, liberals and Jews” and stop Joe Biden’s theft of the election.

“Trump’s not going to stand for it, and he’s going to get a second term,” he said. He was bewildered when I told him that this was all nonsense, that everything he believed was false and bigoted; he was startled that I could be so misinformed.

It was an echo of conversations I’d had after 9/11, from Pakistan to Gaza, Iraq to Yemen, in which local people told me that it was American Jews or the C.I.A. that had organized the attacks on the twin towers. Amid mass delusion and a miasma of bigotry and conspiracy theories, they took up arms or bombs to defend Islam from infidels.

Those young Saudis, Afghans and others who backed violence in some cases aren’t so different from those who were manipulated by Trump and his allies into attacking the Capitol. One thing we should have learned from that epoch is the need not only to confront terrorists individually but also to clear out the ecosystem that produces them. So here are five lessons from that war on terror to inform today’s:

Invoke “moral clarity.” We instinctively reach for the military toolbox when we’re attacked, but it’s also important to fight a war of ideas and delegitimize certain behaviors and speech. To me, that’s why it’s crucial that impeachment be a teachable moment.

Pursuit of moral clarity always leads to flurries of whataboutism and bothsidesism, and there are usually elements of truth to such objections. But we can accept that the world is nuanced and inconsistent without giving up a moral compass to navigate it.

In the 1960s, some on the left believed that violent revolution was necessary to fight an entrenched system, but such violence led to a healthy revulsion. There are still some on the left sympathetic to violence, but for now the biggest challenge is to mobilize public opinion to stigmatize violence by white nationalists on the right.

Beware the educated leaders. People often believe that it’s poverty and illiteracy that drive terrorism, but that’s too simplistic. The 9/11 plot was orchestrated by university-educated elites. Last week’s Capitol rampage was obviously entirely different and not comparable, but it was galvanized by a trio with Ivy League degrees. And yes, I’m talking about Donald Trump, Josh Hawley and Ted Cruz. They all know better, and they should be held responsible.

Tackle the ecosystem. The United States realized after 9/11 that to succeed in the war on terror it had to reform extremist madrasas, religious schools that preached hatred. Today the equivalent of those madrasas are online platforms and right-wing bloviators — and again we face complicated free speech issues.

I believe deeply in listening to alternative voices, not drowning them out. That’s why I went to extremist mosques in Pakistan, and it’s why I had an account on Parler. But I also saw how fanatical mosques inculcated violence and how Alex Jones, Sean Hannity and Donald Trump used their platforms to spread racism, bigotry and conspiracy theories in ways that made America a more frightening place.

They have First Amendment rights, but not a right to advertising or to private platforms. So I’d like to see pressure on advertisers to withdraw from Fox News so long as it functions as an extremist madrasa, and cable providers should be asked why they distribute channels that peddle lies. 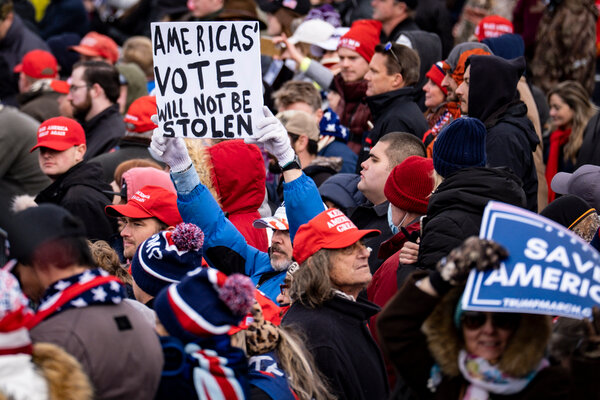 Disarm terrorists. We owe Washington, D.C., a debt of gratitude for limiting firearms. Imagine if thousands of the rioters at the Capitol had been carrying military-style rifles: We would have seen a blood bath. Gun laws saved lives in Washington, and we should try to restrict firearms at other so-called protests that can spark violence.

Don’t get distracted. Officials have a history of looking in the wrong direction for threats, always suspecting “the other,” and that may be why the white Republican establishment fortified the Capitol during Black Lives Matter protests but left it poorly protected from pro-Trump rioters. As the Capitol attack was unfolding, Senator Susan Collins’s “first thought,” she said later, was that the Iranians were attacking.

It’s natural to downplay the familiar. I remember the denialism of leaders in Saudi Arabia and Pakistan who minimized their domestic extremism. But threats from within are often the most dangerous, and that’s particularly so when the leader in charge of protecting a nation is inciting riots against it. Impeachment may help, but it’s a long road ahead.