Did Thursday’s debate — the final for this election — change anyone’s mind about who should lead the country? Opinion’s political writers have shared their thoughts and we’ve asked readers to do the same. On the whole, they found the evening’s proceedings far more palatable than the first matchup between President Trump and Joe Biden:

“This debate was almost watchable,” wrote Emily Smith, a reader in Seattle. “Who won? The moderator.”

But there was disagreement as to who was the more persuasive orator.

“Trump’s attack on Biden’s statement about oil and gas was the first effective outreach to traditional conservatives that I have seen during the election,” wrote Robby O’Neil in Austin, Texas. On the other hand, Simeon Atha in Columbus, Ohio, found Biden’s promise to wind down the oil industry inspiring. “As a young person, it’s really encouraging to hear that there’s hope I’ll have a healthy planet to live on,” he wrote.

Who succeeded in the ultimate mission to win over undecided voters? “The mere fact that Trump was able to appear even semi-presidential could constitute a huge win for him,” wrote Grace Nevins in New York. David Brown in St. Louis agreed: “It was a relatively neutral debate, which I believe ends up being a win for Trump. He may have stopped hemorrhaging swing voters.”

Donald Stone in Middleton, Wis., thought Biden’s performance was a win for all Americans. “This was the best debate I’ve ever seen because it showed the clearest difference between candidates,” he wrote. “If Biden loses this election, it won’t be his fault. It will mean that America is smaller than he believed it to be.”

More analysis from our readers follows. Their comments have been edited for length and clarity. 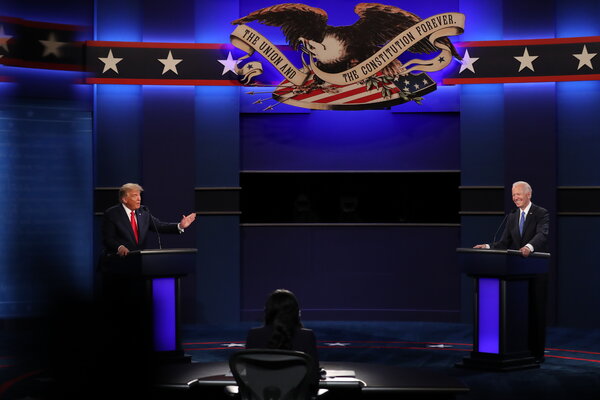 Arezu Riahi, Boston: As much as it pains me to say it, Trump. He has a way with these catchphrases that stick in the heads of voters on the fence: “Forty plus years and you didn’t do anything,” “You got nothing done,” “You built the cages” — which are mostly falsehoods, but I can’t remember anything Biden said to prove as much.

Eduelle Jan Macababbad, the Philippines: It was a tie. President Trump successfully challenged the credentials of his opponent. Former Vice President Biden went on the offensive as he scrutinized his opponent’s records. I personally believe that while this debate won’t mean anything, they have fundamentally represented their beliefs — and those of their parties — in a striking manner. The energy, perseverance and motivation of both candidates were on full display tonight.

David Anthony Diggs, Victorville, Calif.: Biden. All of his responses were couched in policy and coherent thought. Trump’s responses all had one wing dipped in unfounded conspiracy and the other in flat-out made-up facts and figures. Plus, Trump still hasn’t remotely recognized the 200,000-plus Covid deaths that deserve far more than being ignored as “it is what it is.”

R. Kathleen Dillon, Brooklyn, N.Y.: Biden missed some zingers — that pollution is down because of Obama and that opportunity zones have been misused by the wealthy. He should’ve hit harder about the G.O.P. Senate having stymied actions he and Obama wanted. I think Trump won back a few of his base but anyone who is current with the news knows Biden told the truth while Trump dissimulated, equivocated and didn’t address the issues.

Carroll McDonald, Baraboo, Wis.: Joe Biden won, although he faced a much better opponent in the second round of debate. For that reason, it’s a slimmer win. Both Biden and Trump got in their licks but Trump’s tended to be personal attacks against Biden while Biden’s were about issues that Americans care about such as the coronavirus, racial issues and health care.

Mike Lethby, Littlehampton, England: I think Trump was much more measured than in the first debate, as he needed to be. Biden did not seem to me to be as potent and hard hitting as he could have been. In short, the debate offered a softer view of both candidates, which probably will not change many minds in the U.S. electorate.

Lee H. LaRue, Texas: When Biden said he was going to end the oil industry. Bye-bye, Pennsylvania! Trump gets 20 electoral votes after one Biden gaffe. A second moment was Trump saying you can’t run the country from your basement.

Jane Walsh, Baltimore: When Trump talked about the “tiny little windows” he was clearly losing it. It must have taken a lot of self-discipline for Biden to keep from guffawing.

Simon G., South Carolina: Biden opened the Burisma/Hunter can of worms himself. I think he was nervous and ready for that attack but telegraphed his counterpunch too early, leading to an extended segment where his various foreign entanglements were on the forefront of the audience’s minds.

Rebecca Workman, Ridgecrest, Calif.: I think the pivotal moment came when talking about the children separated at the border. President Trump’s pinning the cages on the previous administration fell flat against having no answer about reuniting children with their parents. Humanity reigned supreme. Viewers can’t deny wanting to know the safety and security of those children can be restored.

Ford Parker, Knoxville, Tenn.: When Trump claimed he was the least racist person in the room. The entire world heard him encourage police brutality, ask the Proud Boys to “stand by” and condemn the Central Park Five to death.

Wendy Maland, Wauconda, Ill.: When Biden suggested that most voters don’t care about arcane arguments and conspiracy theories, that they had their own real troubles to address, Trump called those the words of a typical politician. This moment was pivotal, perhaps, for both candidates: We suddenly saw, in relief, Biden caring about Americans and Trump cynically seeing that concern as mere political calculation.

Aron Filbert, Omaha: When Biden said he’d released 22 years of financial information and then turned to the president and asked him what he’s hiding. The president can’t hide behind his auditors anymore.

Something small but revealing

Grace Nevins, New York, N.Y.: Trump didn’t really lie any less, he just sounded less unhinged while doing it. For Democrats, that is the most dangerous version of Trump there is — Republican voters who are waffling will likely find it easier to justify voting for Trump if he manages to pull off the appearance of fitness for office.

Robert Lenoil, Shingle Springs, Calif.: Trump reacted poorly to Biden calling him Abraham Lincoln, not even realizing Biden was mocking him for saying he had done more for Blacks than the president who had ended slavery. Trump, always the name-caller, could not take his own medicine.

Robby O’Neil, Austin, Texas: Biden called the “Proud Boys” the “Poor Boys.” It’s a small slip but he faltered in a moment that could have given him a platform to effectively attack Trump’s support of racists. Biden is losing with young Black voters, and he floundered when he had an opportunity to score some real points.

Richard Johnson, West Lafayette, Ind.: Trump is behaving as though he’s the outsider and Biden is the president. He seemed to be blaming Biden for all the things that have happened during this administration

Patricia Alfieri, Nobleboro, Maine: That Trump said to the moderator, “I like the way you are doing this” and then proceeded to ignore the rules, not restrain his outbursts or answer the questions. To those of us watching, this demonstrated his misogyny and privilege. He thought he could flatter her and then get his way.

Joe McCallister, Bergen County, N.J.: Biden showed his centrist hand. While he might be the Democrats’ best hope of beating Trump, he is no leftist. Trump suggests that Biden is going to be the puppet of a cabal of socialist Democrats, but I think Biden is going to be a lot more moderate than Trump is portraying him.

Andrea N., Italy: Biden was losing patience and getting angered much more than Trump. I was virtually whispering to him: “OK, now, just relax. It’s cool, you’re winning the war.”

Reuel Johnson, South Bend, Ind.: Biden looked at his watch. Oops! Reminiscent of Bush Sr. thinking maybe he can just drain the clock before election. Biden’s long look does not seem to have been as damaging as Bush’s, perhaps because by that time in the “debate” reasonable people were doing the same and crediting him for holding up so well in the face of fact-challenged Trump.

Opinion | Donald Trump Is Leaving Behind Blueprints to End Democracy

Opinion | We’re Living in a World of Walls. Here Is a Window to Escape.