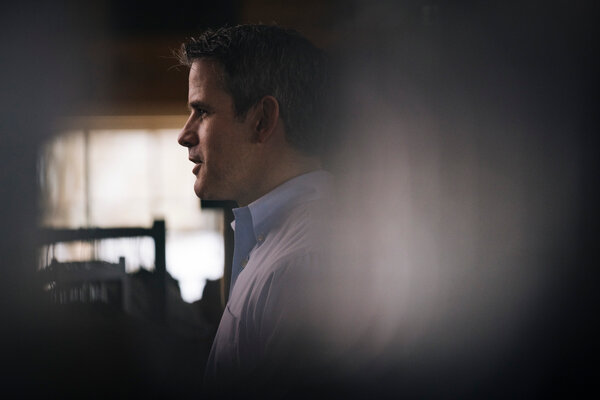 I am saddened by what Representative Adam Kinzinger, a Republican who voted for impeachment, is dealing with from his family — in tears as I type this. I can somewhat relate: I received a communication (email) from my father after we disagreed on politics (I support Joe Biden, he supports Donald Trump) telling me that I’d been “canceled” and my sister-in-law was now his daughter.

It is a tough blow to receive this sort of message from a family member, but I hope that Mr. Kinzinger takes comfort from knowing that many of us who are not his family are proud of him, and hope he is able to hang tough and stand tall for having voted and spoken his conscience.

If I were an Illinois resident, I would switch from voting Democratic to vote for him. I hope he has family and friends who are standing by him and comforting him with love and support for his honesty and integrity.

In my case, a week after the stinging and hurtful email, I received a call and a sincere apology. We are back in touch and agreeing not to discuss politics. I hope for a positive outcome for Mr. Kinzinger as well.

Independent sellers in our store are thriving.

Amazon works hard every day to support millions of businesses around the world, helping them reach millions of customers. These businesses are vital to Amazon’s continued growth and represent nearly 60 percent of physical product sales in our store.

Since Amazon went public in 1997, it has been profitable every year since 2003 except 2012 and 2014, when we reported losses due to investments in new businesses.

As you reported (On Tech, nytimes.com, Jan. 27), “Amazon’s commission on sales — about 15 percent — is roughly the same as that of other shopping sites, like Walmart.” While many sellers choose to pay for services like storage and delivery, these services are optional.

Amazon has zero tolerance for price gouging. As a result, we have suspended more than 10,000 sellers and referred the worst offenders to law enforcement since the pandemic began. We also strongly support federal price-gouging legislation.

“Trump Loyalists May Undercut Biden’s Agenda on Immigration” (front page, Feb. 4) makes clear that although we may have new leadership in the White House, we have the same old rogue Immigration and Customs Enforcement.

President Biden announced a new deportation moratorium on his first day in office, and still ICE charters deportation flights to Haiti, Jamaica and other primarily Black countries. ICE is exploiting the moratorium’s loopholes to go after those most vulnerable to deportation: Black immigrants. This is just one example of how systemic racism permeates the immigration system.

While others celebrate President Biden’s executive orders, we in the Black community watch in horror as our loved ones continue to be ripped away from us. President Biden must keep his promise to combat racial inequity and bring dignity to our immigration system by issuing new guidance to finally stop the deportations.

Patrice Lawrence
Washington
The writer is the co-director of UndocuBlack, a community of currently and formerly undocumented Black people.

Opinion | Will We Choose the Right Side of History?