The global leaders in Covid-19 vaccination rates are Israel and the United Arab Emirates. After them come a handful of countries that have each given between 30 and 45 shots for every 100 residents, including the United States, Britain, Bahrain, Chile and Serbia. 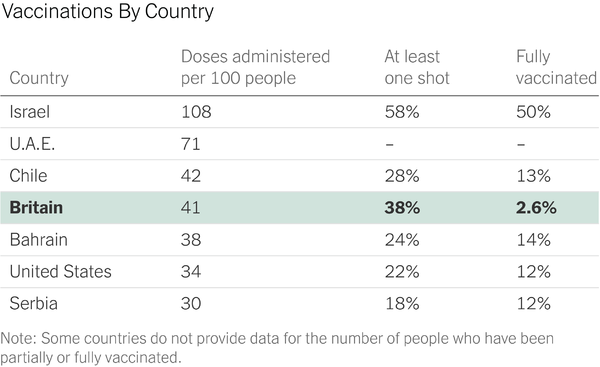 But these handful of countries have followed two different strategies. The U.S. and most others have tried to make sure that anybody who gets a first vaccine shot gets the second shot within a few weeks (except in the case of the Johnson & Johnson vaccine, which requires only one shot). Britain has instead maximized the number of people who receive one “jab,” as the British call it — and has delayed the second jab, often for about three months.

Kate Bingham, a venture capitalist who led the committee that advised the British government on vaccination, has described the strategy this way: “I think it’s the right public health response, which is to show that you try and vaccinate as many people as possible, as soon as possible. Better to protect everybody a bit rather than to vaccinate fewer people to give them an extra 10 percent protection.”

So far, the data suggest that Britain’s approach is working — because even a single shot provides strong protection against the virus.

As Dr. Robert Wachter of the University of California, San Francisco, has written, “According to most vaccine experts, delaying shot #2 by a few months is unlikely to materially diminish the ultimate effectiveness of two shots.”

In Britain, the daily number of new Covid cases has fallen by more than 90 percent since peaking in early January. The decline is larger than in virtually any other country. (In the U.S., new cases have fallen 79 percent since January.) Given that the contagious B.1.1.7 variant was first discovered in Britain and is now the country’s dominant virus form, “Britain’s free-fall in cases is all the more impressive,” Wachter told me. “Clearly their vaccination strategy has been highly effective.”

Britain’s approach not only brings immediate benefits, in terms of lives saved; it also reduces the chances of future outbreaks: The fewer people who have Covid, the fewer who can infect somebody else. That’s especially important when more contagious variants are circulating. Worldwide, the number of confirmed new cases has risen 21 percent over the past month.

It is probably too late for the U.S. to change policy and adopt the British approach. Doing so would create widespread confusion and frustration. Still, there are lessons from Britain:

Speeding up a vaccination program brings enormous benefits. The U.S. has recently been giving about 2.5 million shots a day, up from about 800,000 in mid-January. But the federal government will soon be receiving closer to four million shots a day from the vaccine makers. A big question is whether the Biden administration and state governments will be able to continue increasing the pace at which people are getting shots in their arms.

For countries where vaccine programs have only just begun, as in much of South America, Africa and Asia, the British approach may be worth mimicking.

Finally, keep in mind that one of Britain’s main vaccines has been AstraZeneca’s — the same one that some other European countries have stopped using this week, out of concern over blood clots. But there is no sign of an increase in clots in Britain. “If the choice is potentially being exposed to Covid-19, or getting the vaccine & being protected, choose the vaccine,” Devi Sridhar, a professor of public health at the University of Edinburgh, wrote yesterday.

All of this comes with the usual caveat: If the data changes, the lessons should change, too. Based on the current evidence, though, Britain appears to have landed on the most effective vaccination strategy — which is yet another sign of how powerful the vaccines are.

The latest: A delay of millions of doses ordered from India will most likely slow Britain’s vaccination campaign in coming weeks.

The E.U.’s drug regulator says that the AstraZeneca vaccine is safe. More than a dozen European countries had halted use over fears of possible side effects. Most of them will resume the shots.

The White House plans to send millions of unused AstraZeneca shots to Canada and Mexico. The U.S. has not yet approved that vaccine.

Some countries have stockpiles. Others have nothing. The Times’s Allison McCann and Lazaro Gamio have mapped out who can and who can’t get vaccinated right now.

The man charged in the deadly shootings at three Atlanta massage parlors had previously visited two of the businesses, the police said. He had also checked himself into rehab over a self-described sexual addiction that went against his strict Christian upbringing.

For Asian-American women — six of whom died in the shootings — sexism and racism are often inseparable.

In New York, the number of hate crimes reported with Asian victims soared last year. But activists say many attacks are not charged as hate crimes.

The House of Representatives passed bills that would give millions of so-called Dreamers and other undocumented immigrants a path to citizenship. Senate Republicans are likely to block the bills.

Russia recalled its ambassador to the U.S. after Biden said he thought that President Vladimir Putin was a “killer” and vowed that Putin would “pay” for interfering in the 2020 election.

The Biden administration’s first face-to-face meeting with senior Chinese diplomats got off to a tense start.

A simmering conflict between the government of Ethiopia and rebels in the country’s Tigray region has degenerated into a brutal fight, and accounts of atrocities keep emerging.

Amazon, in its efforts to prevent workers at an Alabama warehouse from forming a labor union, has touted its high wages. But they are below average for the region.

Since the military seized control of Myanmar last month, much of society — including hospitals, railroads, schools and shops — has shut down in protest.

The new editor in chief of Teen Vogue resigned before her first day on the job over racist and homophobic tweets she posted a decade ago.

Congress is considering bringing back earmarks, provisions that let lawmakers steer funding to their states. Should it?

Yes: Earmarks help pass bipartisan legislation, The Times’s editorial board argues: “Nothing greases the gears of government quite like pork.” Many top Democrats and Republicans support restoring earmarks.

No: Earmarks aren’t significant enough to get legislators to support the other party’s agenda, Reason’s Eric Boehm writes. They also promote waste and even corruption, Representative Katie Porter, a California Democrat, argues in The Wall Street Journal.

Neigh: A horse retreat in New Mexico offers life-changing “attunement.” But what is it?

Lives Lived: Dick Hoyt finished more than a thousand road races, but he didn’t run them alone. His partner was always his son Rick, a quadriplegic with cerebral palsy, whom he pushed in a wheelchair. Hoyt died at 80.

It began as a response to the pandemic: A temporary policy allowed American museums to sell art from their collections to help cover operating costs. Now, museums across the country are debating whether to keep the measure.

The old guidelines, from the Association of Art Museum Directors, allowed museums to sell items if they no longer fit an institution’s mission and if the proceeds went to buy other art, not to pay staff salaries or other bills.

Museums that favor keeping the new arrangement say it’s necessary for their long-term survival. “It’s misinformed to think that every museum has a board full of billionaires,” said Anne Pasternak, the director of the Brooklyn Museum. During the pandemic, the Brooklyn Museum has raised nearly $35 million at auction sales.

Last month, even the Met — the largest museum in the U.S. — said it might sell items to help underwrite the salaries of staffers involved in collection care.

Those opposed to the continuation of these sales argue that they undermine museums’ mission. “If you want to flip paintings, there are many other types of institutions where you can do that,” Erik Neil of the Chrysler Museum of Art in Norfolk, Va., told The Times. “And they are called commercial galleries.”

Bright, crunchy and tart, salad-e Shirazi is a Persian salad that pairs well with practically every meal.

Instead of filling out a bracket, try The Times’s prediction challenge. (You don’t need to be a college basketball expert to give it a shot!) And this guide may just answer all your questions.

Take a look at life in Canada’s remote and pristine Northwest Territories, home to Indigenous peoples of many cultures and languages.

Which movie earned the most Oscar nominations this year? Take this week’s News Quiz and compete with other Times readers. Sign up here to receive the quiz in your inbox every week.

The pangram from yesterday’s Spelling Bee was biological. Here is today’s puzzle — or you can play online.

Thanks for spending part of your morning with The Times. See you Monday. — David

A clarification: Yesterday’s newsletter said that about 1 percent of Covid patients in the U.S. had been hospitalized. I should have been less definitive and said — as the chart in the newsletter showed — that estimates of the hospitalization rate range from 1 percent to 5 percent.

P.S. The Times received Oscar nominations this week for “Time,” one of the company’s first feature-length documentaries, and the Op-Doc “Alone.”

Today’s episode of “The Daily” is about Gov. Andrew Cuomo. On “Still Processing,” Jenna Wortham and Wesley Morris discuss a toxic racial slur.